HubSpot is a developer and marketer of software products for inbound marketing and sales.

HubSpot has 1000+ employees. It was established 2006-06-09. The Alexa global rank for their website the last time emailexpert checked was 608 - the lower the number the more popular the website. The certifications they hold: M3AAWG

It's not enough for businesses to grow. They need to #GrowBetter. Use @HubSpotSupport for Twitter support.

"As entrepreneurs, this is not the time to shrink into obscurity." - Liz Simpson, Founder, Stimulyst

Thank you HubSpotters for making us one of the @GPTW_US Fortune Best Workplaces for Women™️ 2020! We're proud to have your help in building a culture people love 🧡#BestWorkplaces https://www.greatplacetowork.com/best-workplaces/women/2020 #hubspotlife

Just a reminder that you can accomplish whatever you set your mind to.

What do these have in common?

At the risk of getting sci-fi, and dancing in our own playground, let's just say this: The Future is Sound.

"Life will continue whether you look back or forward, so I'm focused on what's in front." - Dana Canedy, SVP and Publisher, Simon & Schuster trade imprint

HubSpot is an American developer and marketer of software products for inbound marketing, sales, and customer service. It was founded by Brian Halligan and Dharmesh Shah in 2006.

HubSpot was founded by Brian Halligan and Dharmesh Shah at the Massachusetts Institute of Technology (MIT) in 2006.[5]

The company grew from $255,000 in revenues in 2007 to $15.6 million in 2010.[5][6] Later that year HubSpot acquired Oneforty, the Twitter app store founded by Laura Fitton.[7][8] The company also introduced new software for personalizing websites to each visitor.[9] According to Forbes, HubSpot started out targeting small companies but "moved steadily upmarket to serve larger businesses of up to 1000 employees."[10][11] HubSpot filed for an initial public offering with the Securities and Exchange Commission on August 25, 2014, requesting they be listed on the New York Stock Exchange under the ticker symbol HUBS.[12] In July 2017, HubSpot acquired Kemvi, which applies artificial intelligence and machine learning to help sales teams.[13]The company reported revenues of $674.9 million in 2019.[14]

In 2010, an article in the Harvard Business Review said that HubSpot's most effective inbound marketing feature was its free online tools.[23] One such tool, the Marketing Grader, assessed and scored website performance.[24][25] The company introduced a Twitter tracking feature in 2011.[26][27]

In 2018, Hubspot integrated Taboola on the dashboard, a global pay-per-click native ad network.[29]

The company launched HubSpot CRM Free in 2014.[31] The CRM product tracks and manages interactions between a company and its customers and prospects. It enables companies to forecast revenue, measure sales team productivity, and report on revenue sources.[32][33][34] The software as a service product is free and integrates with Gmail, G Suite, Microsoft Office for Windows, and other software.[35]

HubSpot has been described as unique because it strives to provide its customers with an all-in-one approach.[17][36] A 2012 review in CRM Search said HubSpot was not the best business solution in each category but that taken as a whole it was the best "marketing solution" that combined many tools into one package.[10] It identified HubSpot's "strengths" as the sophistication of its Call to Action (CTA) tool, its online ecosystem and its "ease of use." Its weakness was described as having "more breadth than depth." The review said the lack of customization and design tools could be limiting and that it was missing advanced features such as Business Process Management (BPM) tools to manage workflow.[10] 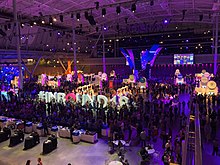 HubSpot hosts an annual marketing conference for HubSpot users and partners called "INBOUND." The conference is typically located in Boston. In 2019, Hubspot hosted its largest conference in the event's history, with a record of over 26,000 attendees from 110 countries.[37][38] The first INBOUND conference took place in 2012. Since then, speakers such as Michelle Obama, Tig Notaro, and Issa Rae, have spoken at the conference.

In July 2015, Hubspot's CMO, Mike Volpe, was dismissed for violating HubSpot's code of business conduct after it was found that he tried to obtain a draft copy of the book Disrupted: My Misadventure in the Start Up Bubble, written by his former employee Daniel Lyons.[39][40] According to an article in the Boston Globe, records obtained under the Freedom of Information Act indicated that HubSpot executives considered the book "a financial threat to HubSpot" and Volpe used "tactics such as email hacking and extortion" in the attempt to prevent the book from being published.[41]

In April 2016, after his book was published, Lyons wrote in the New York Times that HubSpot had a "frat house" atmosphere. He also called the company a "digital sweatshop" in which workers had little job security.[42] Later that month, HubSpot's founders gave an official response to the book, in which they addressed several, but not all, of Lyons' claims.[43]

need to drive customer engagement for their business.